The Porsche GT Team finished round two of this year’s FIA World Endurance Championship (WEC) third and fourth in the GTE-Pro class. At the Autódromo Internacional do Algarve, works drivers Kévin Estre from France and Neel Jani from Switzerland as well as Denmark’s Michael Christensen drove from pole position to the podium. At the flag, the No. 92 ca. 515 PS Porsche 911 RSR was only 20 seconds off clinching second place. Works drivers Richard Lietz from Austria, Gianmaria Bruni from Italy and Frédéric Makowiecki from France secured fourth place after 278 laps on the 4.684-kilometre Grand Prix circuit on the Algarve coast in Portugal. .

At the start, Kévin Estre immediately swept into the lead. At the wheel of the number 92 car, the Frenchman promptly pulled away from his pursuers and eked out an eight-second lead during the first hour. After the first full-service stop, Neel Jani rejoined the race in second place with four fresh tyres. Prior to this, Gianmaria Bruni had fended off the second factory-run Ferrari in his No. 91 Porsche but had to relinquish his third place after a light nudge. A puncture caused by car debris on the track shortly before the two-hour mark forced him to pit earlier than planned, and Frédéric Makowiecki took over the wheel.

With the air and asphalt temperatures rising, both 911 RSR were unable to maintain the ideal performance window of the selected Michelin specification and lost ground. At the halfway mark, they were running a number of laps behind in third and fourth. A safety car phase after five hours and 15 minutes of racing and an adjusted tyre strategy turned the tables again for Porsche. Meanwhile, Estre had replaced Michael Christensen in the No. 92 cockpit, Richard Lietz later handed the No. 91 sister car back to Bruni. Both 911 RSR caught the top two in their category and a spirited final phase unfolded. At the start of the final hour, the four GTE-Pro rivals were running in the same lap. Estre even managed to work his way up to second place only to relinquish it at his final pit stop – which came at an inopportune moment, as it turned out: with about 30 minutes of racing left, a caution phase played into the hands of the competition, enabling them to defend their second place to the flag. Bruni crossed the finish line fourth in class.

Alexander Stehlig, Head of Operations FIA WEC: “Third and fourth place is not the results we’d hoped for. We set pole position again yesterday and we thought we could build on what we’d achieved at Spa-Francorchamps. During the first half of the race, we were simply too slow and couldn’t match the pace of our competitors, because our tyres deteriorated more. From about the halfway mark, we opted for the second tyre spec and that allowed us to catch up. Our number 92 car was on a sure course to second place until the final 30 minutes of the race. The full course yellow came at an unfortunate time: We had already completed our last pit stop. A rival pitted under yellow and therefore passed us.”

Round three of the World Endurance Championship WEC will be contested on 18 July at the Autodromo Nazionale di Monza in Italy and runs over six hours. 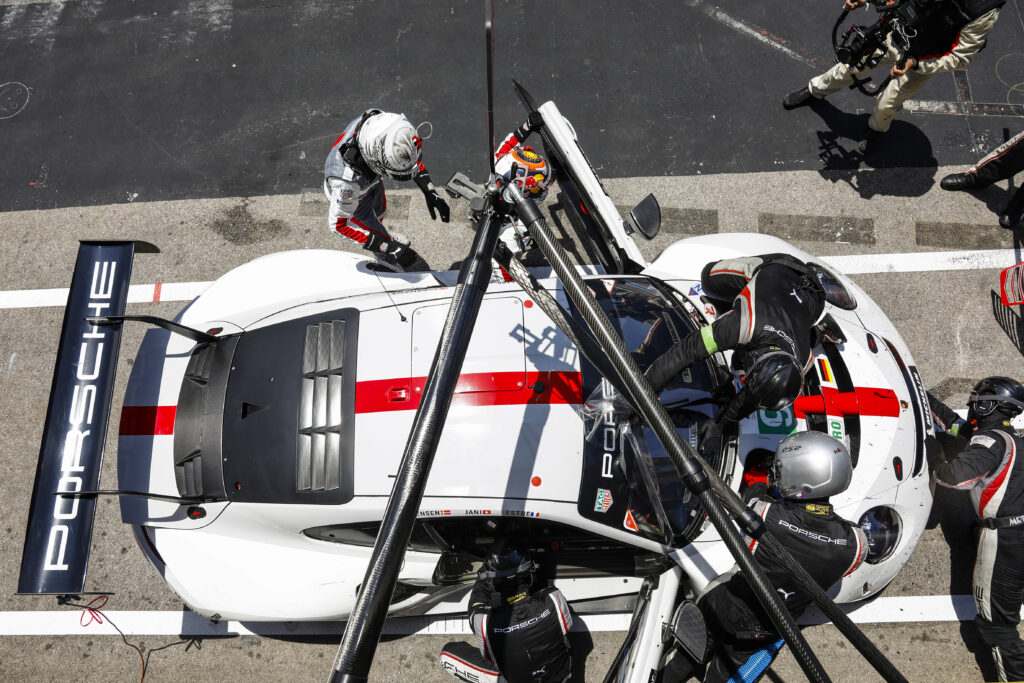 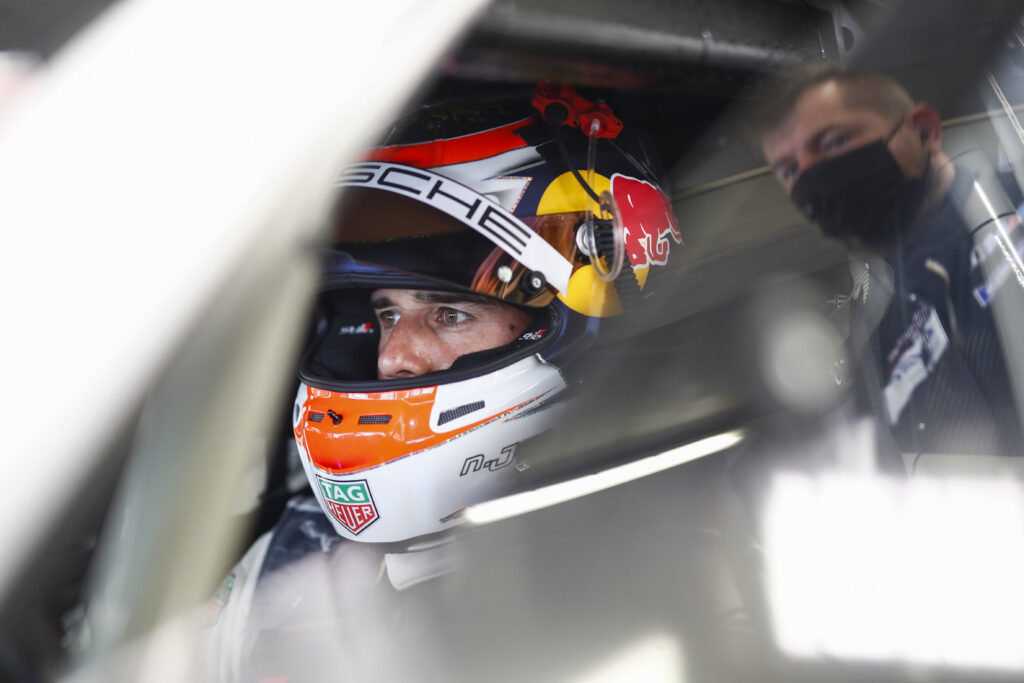 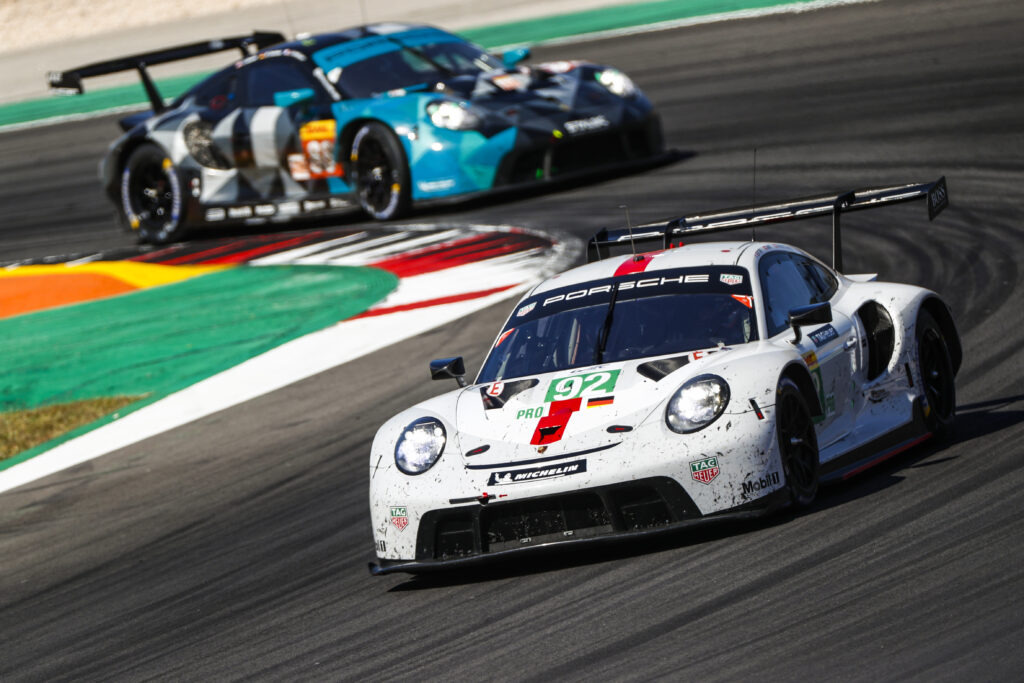 Drivers’ comments on the race
Kévin Estre (Porsche 911 RSR #92): “Victory would definitely have been possible today but we took a gamble with the tyres. We should’ve changed our strategy earlier but it’s always easier to say that afterwards. Second place was definitely within reach. It’s a shame because there were a lot of points up for grabs this weekend. We learned a lot, but now we have to see why our tyre strategy didn’t work out. We’re a team and we’ll grow from this.”

Neel Jani (Porsche 911 RSR #92): “That was a very, very difficult race for us. We had big problems with the tyres, especially when it got hotter from noon to around three in the afternoon. Ferrari was able to pull away from us during this phase. After that, we could forget about a win, but second place was still within reach. Actually, things looked pretty good, but towards the end of the race, the full course yellow threw us back to third as our opponent managed to pit during that time. That put an end to our hopes for second place – what a pity.”

Michael Christensen (Porsche 911 RSR #92): “We had a good start to the race, but as it got warmer and the track temperatures rose, we struggled with the grip. At the end of the race, when it cooled off a bit, the situation got a little better, but at that point we’d already lost too much. Also, at the end, we were very unlucky with the full course yellow and it cost us second place. That’s how it goes in racing sometimes.”

Gianmaria Bruni (Porsche 911 RSR #91): “It was a hard race for Porsche and we didn’t yield the result we were expecting. We will learn from this and for sure try to get stronger for the next race.”

Richard Lietz (Porsche 911 RSR #91): “We knew that the eight-hour race here in Portimao would be hard, but we didn’t expect problems with the tyres, which kept us busy over the entire race distance. As a result, we lost valuable time to our rivals. We now have to take a good look at the race and try to answer the questions that have arisen.”

Frédéric Makowiecki (Porsche 911 RSR #91): “We knew that this track is quite severe on the car in certain aspects. We didn’t get the result we wanted. However, on the positive side, we learnt quite a lot, which was also the goal. That gives us the opportunity to be stronger for the next races.”