Facing difficult conditions, the Porsche GT Team has achieved its third win of the season in the FIA World Endurance Championship (WEC). At the six-hour race in Bahrain, Frenchman Kévin Estre and Neel Jani from Switzerland in the No. 92 Porsche 911 RSR narrowly beat their works driver colleagues Gianmaria Bruni from Italy and Austrian Richard Lietz. Thanks to the one-two result in the Kingdom of Bahrain on the Persian Gulf, Porsche has moved into the lead of the manufacturers’ championship before the final round of the season.

“It was a difficult weekend because there was a lot of pressure – we definitely had to perform today,” explains Alexander Stehlig, Head of Operations FIA WEC. “We needed to earn maximum points in order to stay in the fight for the championship heading to the final round. It worked. I’d like to thank all the mechanics, engineers and drivers – that was a perfect performance. From the outside, perhaps this double victory looked easy – it was anything but that. The tyres had to endure long stints in intense heat. It always hangs on the knife’s edge. We balanced this beautifully. Now we go up against our rivals on an equal footing for the big finale next weekend. I’m really looking forward to it!”

In an air temperature of 35 degrees Celsius and with a considerably hotter track surface, round five of the season turned into the expected heated battle in the truest sense. Taking up the race from positions one and two on the grid, Kévin Estre and Gianmaria Bruni kept their cool and successfully fended off their competitors’ attacks. The next challenge was to manage their Michelin tyres over long distances on the extremely demanding asphalt, which the experienced drivers did perfectly – thanks as well to the first-class work of their pit crews. The experiences from the three practice sessions helped to maintain the pace over the hour-long stints. The No. 92 car in the GTE-Pro class crossed the finish line a mere 0.690 seconds ahead of the identical sister car. With this result, Estre and Jani managed to slash the gap in the drivers’ world championship to just one point as they head to the final round in Bahrain next weekend. Bruni and Lietz rank third. In the manufacturers’ classification, Porsche has recaptured the lead.

Drivers’ comments after the race
Kévin Estre (Porsche 911 RSR #92): “That was a very critical victory for us in the No. 92 car and an extremely important one-two result for Porsche. This gives us every chance to fight for the title at the finale. As a team, we gave a perfect performance. I’d like to thank our teammates in the sister car for not making life too difficult for us. That really helped. Now I’m looking forward to the decisive race. We definitely want to achieve a similar top result again.”

Neel Jani (Porsche 911 RSR #92): “A one-two success for the Porsche 911 RSR – it couldn’t be better. We drove with our sister car in formation for the entire race. Right at the end, they stopped their attack. Many thanks to our colleagues! First place today is hugely important for us to be in the best position in the drivers’ world championship for the final round. We’re now just one point behind the leaders. Next weekend we’ll do everything to scoop the title pool at the season finale.”

Gianmaria Bruni (Porsche 911 RSR #91): “Mission accomplished. We wanted positions one and two – and we did it. It couldn’t be better for Porsche. I’m very grateful to be part of this big Porsche family. We’ve taken another step towards the possible title win. Hopefully, we’ll take a much bigger step next Saturday.”

Richard Lietz (Porsche 911 RSR #91): “It was crucial to preserve the tyres over the distance. Bahrain is extremely demanding so you have to take care. If you overexploit the peak grip at the start on fresh tyres, you pay the price at the end of the stint. That’s why our focus was always on not putting too much energy into the tyres. This worked well. We also decided not to fight against our team colleagues because that would have cost us a lot of time. From my point of view, this was a perfect race for Porsche.” 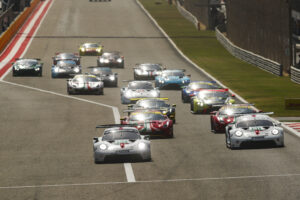 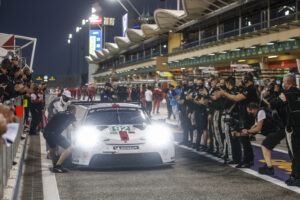 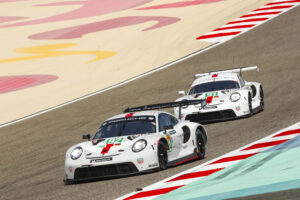 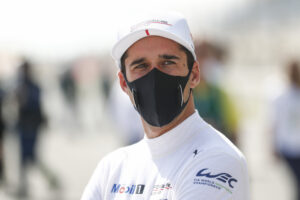 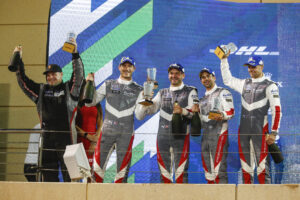