It has been an encouraging start to the season for the TAG Heuer Porsche Formula E Team in the 2019/2020 ABB FIA Formula E Championship. At the Diriyah E-Prix Race 1 in Riyadh (Saudi Arabia). “We are up with the frontrunners; the pace is there. We can build on that,” explained Michael Steiner, Member of the Executive Board for Research and Development Porsche AG.

Porsche works driver André Lotterer (D) was second with his #36 Porsche 99X Electric in the first race of the season. The three-time winner of the Le Mans 24-hour race and 2012 FIA World Endurance Championship (WEC) champion began the race around the 2.494-kilometre circuit to the northwest of the Saudi Arabian capital, Riyadh, from seventh place on the grid.

Neel Jani (CH) finished in 17th place in the #18 Porsche 99X Electric, having been forced to start the race from 20th on the grid after a yellow-flag phase at the end of qualifying. The second race in the ABB FIA Formula E Championship will take place tomorrow (Saturday 23rd November) on the Diriyah Street Circuit.

After reaching the podium on the previous day, Lotterer initially crossed the finish line in sixth place at the end of the second race on the 2.494-kilometre circuit near the Saudi Arabian capital, Riyadh. He finished just over three seconds behind race-winner Alexander Sims (D, BMW). However, he then received a drive-through penalty for overtaking at the start of a safety car period. Lotterer failed to spot the yellow flags as he passed another car that was experiencing technical issues. Having started the race from tenth place, the German driver was demoted to a final position of 14th. Lotterer’s team-mate Neel Jani (CH) moved up five places from 18th on the grid to finish 13th.

With two races out of 14 now complete, the TAG Heuer Porsche Formula E Team is in sixth place in the team standings. The third race of the season is scheduled to take place on 18 January in Santiago de Chile.

Quotes on the Diriyah E-Prix Race 2

Amiel Lindesay (Head of Operations Formula E): “Following on from Friday’s success, that was another good race today. André once again made up some places as he moved through the field. Even though we did not manage to score any points at the end of the second race, it was a positive weekend for the TAG Heuer Porsche Formula E Team. We have gathered some valuable information and now we have to do our homework. I am happy for the whole team. The results give us confidence for the next races of the season.”

Neel Jani (Porsche 99X Electric, #18): “It was a challenging second race but our pace was better than on Friday and it represents a big step forward for me personally. We all gained a lot of experience here and now we have to continue the hard work to ensure that we can benefit from that for the upcoming races.”

André Lotterer (Porsche 99X Electric, #36): “All in all, a great start to the season with the second place on Friday. We could have scored another eight points by finishing sixth today. Unfortunately, I was demoted after the race finished. I was just overtaking Pascal Wehrlein as the safety car appeared on the circuit. That was just really unlucky in terms of timing.”

Quotes on the Diriyah E-Prix Race 1

Neel Jani (Porsche 99X Electric, #18): “Firstly, congratulations to André and the whole team. Reaching the podium in our first race shows that we have done some good development work. Qualifying was not ideal for me and I had to start the race from way back. However, I had found the right pace and rhythm by the middle of the race. I will build on that tomorrow.”Darauf werde ich morgen aufbauen.“

Michael Steiner (Member of the Executive Board for Research and Development Porsche AG): “What happened today was just crazy. I hadn’t expected that. We are proud that we have reached the podium in our first race and we will go on the attack again tomorrow.”

Fritz Enzinger (President Porsche Motorsport and Group Motorsport Volkswagen AG): “What did we learn in Riyadh? Porsche can perform electrically too. Unbelievable – our first race and we made it to the podium. The work we put in over the past year and a half has paid off. André Lotterer was superb and Neel Jani drove well too. A huge thank you to everyone involved in the project and to all our Porsche colleagues who had their fingers crossed for us. Now we are concentrating fully on the second race.”

Pascal Zurlinden (Director Factory Motorsport): “That race went like a dream – and we were already feeling positive after qualifying. Reaching the podium on our first attempt, what more could we wish for? We will continue to work hard and attempt to repeat today’s success.”

André Lotterer (Porsche 99X Electric, #36): “A great debut for all of us: second place. When I told the team a few weeks back that I wanted to reach the podium, they all looked at me like I was mad. And now we’ve done it with hard work and a bit of luck. Qualifying went OK and we finished seventh. I started the race quietly enough, paid attention to my energy management and was able to use ‘Attack Mode’ early to get past a few other cars. At the end, I thought we were even in with a chance of winning the race, but I didn’t want to take too many risks. Starting off with a second-place finish isn’t too bad.” 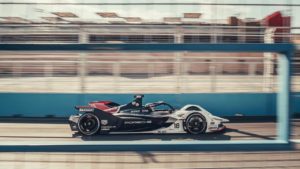 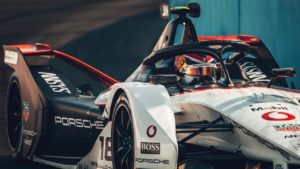 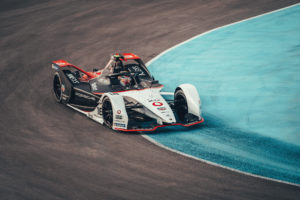